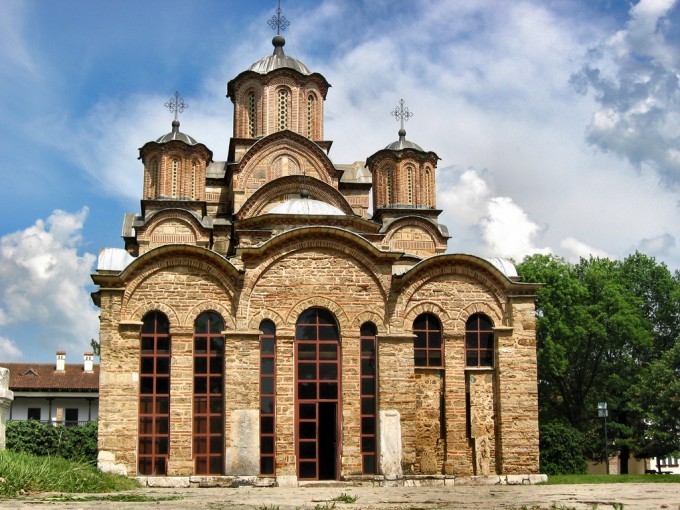 Gračanica (pronounced [ɡratʃǎnitsa]; Serbian: Манастир Грачаница, Manastir Gračanica) is a Serbian Orthodox monastery located in Kosovo. It was founded by the Serbian king Stefan Milutin in 1321. Gračanica Monastery was declared Monument of Culture of Exceptional Importance in 1990, and it is protected by Republic of Serbia, and on 13 July 2006 it was placed on UNESCO’s World Heritage List under the name of Medieval Monuments in Kosovo as an extension of the Visoki Dečani site which was overall placed on the List of World Heritage in Danger.

The Gračanica Monastery is one of King Milutin’s last monumental endowments. It is situated in the village of Gračanica, a Serb enclave 5 km (3.1 mi) from Pristina. The monastery is in the close vicinity of Lipljan (ancient Roman town of Ulpiana), the old residence of bishops.

Fresco of the founder, Stefan Milutin

Gračanica was constructed on the ruins of an older 13th-century church of the Holy Virgin, which was built on the ruins of a 6th-century early Christian three-naved basilica. On the southern wall of the chapel is written the king’s charter, including the following words: “I have seen the ruins and the decay of the Holy Virgin’s temple of Gračanica, the bishopric of Lipljan, so I have built it from the ground and painted and decorated it both from inside and outside”. Of the former monastic compound, only the church has survived. The narthex and the tower were added a few decades later, in order to protect the frescoes on the west facade. The narthex was heavily damaged by the Turks several times between 1379–1383, when the tower was burned and the fire devoured a rich collection of manuscripts and other precious objects. The narthex was reconstructed in 1383. Again, Gračanica suffered damages at the time of the Battle of Kosovo (1389).

During Ottoman rule Gračanica became an important cultural center. In the time of Metropolitan Nikanor (1528–1555) several icons were painted on the altarpiece. Also, because of the printing press, Nikanor obtained numerous service books and objects for the monastic use. The royal doors were commissioned in 1564 by Metropolitan Dionisije, whose death is represented on a fresco in the narthex. Major restoration took place through efforts of Patriarch Makarije Sokolović. All the openings on the external narthex were walled up and new frescoes were completed in 1570. Thanks to Patriarch Pajsije, the church got its leaden roofing, and in 1620 the large cross with the Crucifix was made on the iconostasis. The monastery was exposed to new damages toward the end of the 17th century, in the war between Holy League and the Turks, after the second siege of Vienna – in which the Serbs took part on the Christian side. Turks removed the leaden cross and pulled out the floor tiles, together with the treasure hidden in the church by Patriarch Arsenije III.

After the World War II it was renewed by nuns and has been serving as a convent since. Today there are 24 sisters in the monastery who are active in icon painting, agriculture, sewing and other monastic obediences.

After the Kosovo war of 1999 Bishop of Raška and Prizren Artemije transferred his official seat to this Monastery from Prizren and since then the monastery has become not only the most important spiritual but also the national and political center of the Serbian people in Kosovo.

Gračanica represents the culmination of the Serbian medieval art of building in the Byzantine tradition. The church has the form of a double inscribed cross, one inside the other, the inner one providing for a vertical silhouette so as to raise the central dome upwards on a graded elaboration of masses. The dome rests on four free-standing pillars. Above the spaces between the cross-shafts, four smaller domes give a regular structure to the whole crowning complex. Three three-sided apses (the central one being the largest) put a mild distinction on the altar space externally. The diaconicon and the prosthesis are separated by full walls. Between the nave and the narthex there are wide, heavy pillars and the catholicon is on a level higher. The church was built in alternate courses of brick and stone. At the end of the 14th century an exonarthex was added with double arcades, but these were blinded in the 16th century.

Queen Simonida of Serbia, wife of King Milutin, a fresco from Gračanica monastery

In the church three kinds of painting can be discerned. The earliest is found in the nave, whereas two later ones can be recognized in the narthex. The frescoes were painted in 1321–1322. The painting works have been well preserved. The compositions in the nave deal with the earthly life of Jesus and the ecclesiastical calendar.

The focal paintings of Gračanica include the Festival Cycle, the Passion and the miracles of Christ. Inside the narthex, there are portraits of the founders: King Milutin and Queen Simonida, Queen Hélène d’Anjou (king’s mother) as a nun and King Milutin as a monk. Of particular importance is the Nemanjić dynasty genealogy, the first ever painted, which starts with Stefan Nemanja and ends with Milutin. Also in the narthex, there is an exhaustive illustration of the Last Judgment. The scenes from the life of St. Nicholas are in the north parecclesion, while the walls of the south one display scenes from the Old Testament and the lives of Christ and the Mother of God. The master painters supposedly were Michael and Eutihije with their assistants.

There are also considerable frescoes from 1570 in the exonarthex, commissioned by Patriarch Makarije Sokolović. There are some paintings in the narthex that date back to the late 14th and early 15th centuries, including the Baptism of Jesus, parts of the Virgin’s Acathistus Hymns and the Ecumenical Councils. Two subjects, however, dominate the narthex of Gračanica: the Doxology to the Holy Virgin and the procession of the Serbian archbishops from Saint Sava to Patriarch Makarije Sokolović. A historical composition of the death of the Metropolitan of Gračanica Dionisije covers the southeastern part of the narthex.

The paintings of Gračanica rank highest among the achievements of Milutin’s period, characterized by influences of the Byzantine splendiferous and luxurious style called the Paleologan Renaissance. In terms of style, they are also related to the art of the other of Milutin’s foundations.

Third Lake, Illinois, a suburb of Chicago, is home to the New Gračanica church and monastery complex, which houses a detailed replica of the Gračanica monastery in Kosovo. The church is dedicated to the feast of the “Protection of the Most Holy Mother of God”. Built on land that the Most Holy Mother of God Serbian Association purchased in 1977, the New Gračanica Church and the main building on its grounds were completed and consecrated in 1984. It is an impressive architectural replica of the original Gračanica of Kosovo, but built in a scale eighteen percent larger than the original. New Gračanica is richly attired with detail such as hand-carved wooden entrance doors depicting twenty-three monasteries and churches from various historic and current regions of Serbia.

Fields marked with * are required